10 Most Interesting Abandoned Settlements and Ghost Towns that Became Tourist Attractions. Wait till you see #7 – The Unique Structure of Sanzhi UFO Houses 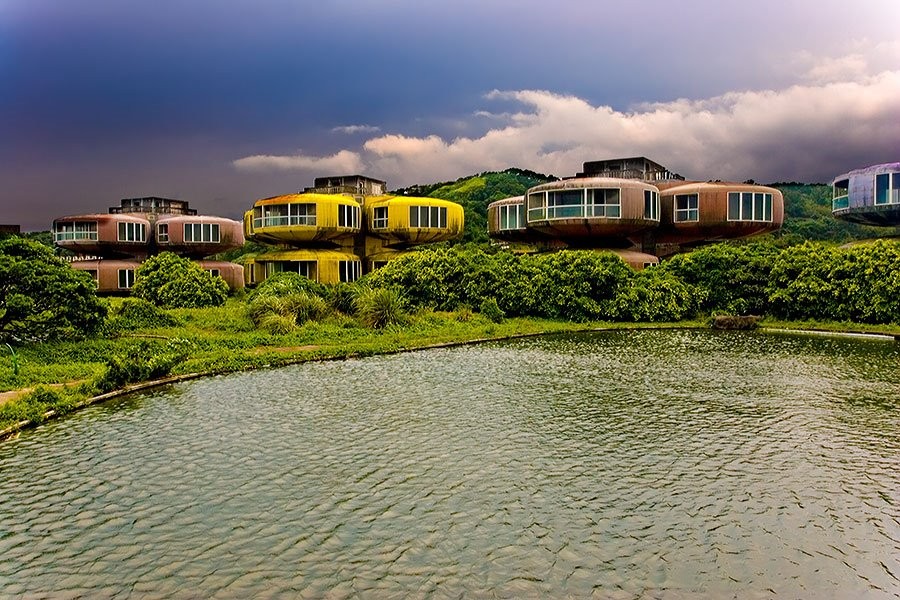 Several interesting deserted settlements that span modernity, from isolated ghost towns to huge abandoned cities have become popular among tourists, like the Sanzhi UFO Houses, a modern ghost town in Taipei. Others that have fallen into decay caused by economic decline, human-caused disaster, civil war, earthquake, landslides and other calamities that have been abandoned for years were preserved and are now considered as tourist attractions. 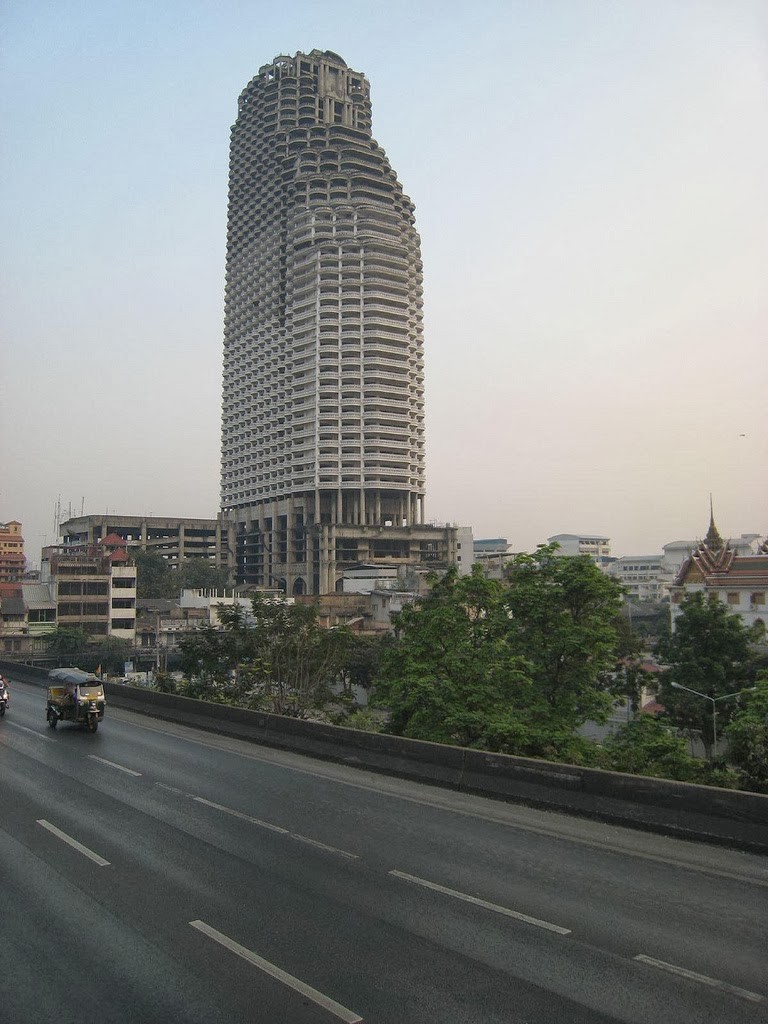 Bangkok’s skyscraper, the tower of the Sathorn Unique, was built in the early ‘90s during the booming economy of Thailand. The modern 49-storey was home to the rich and famous of Bangkok. Because of the Asian financial crisis, the tower was abandoned in 1997, when only 80% of the construction was completed. The building became popular to the urban explorers who often climb the top of the tower to get a superb view of Bangkok. 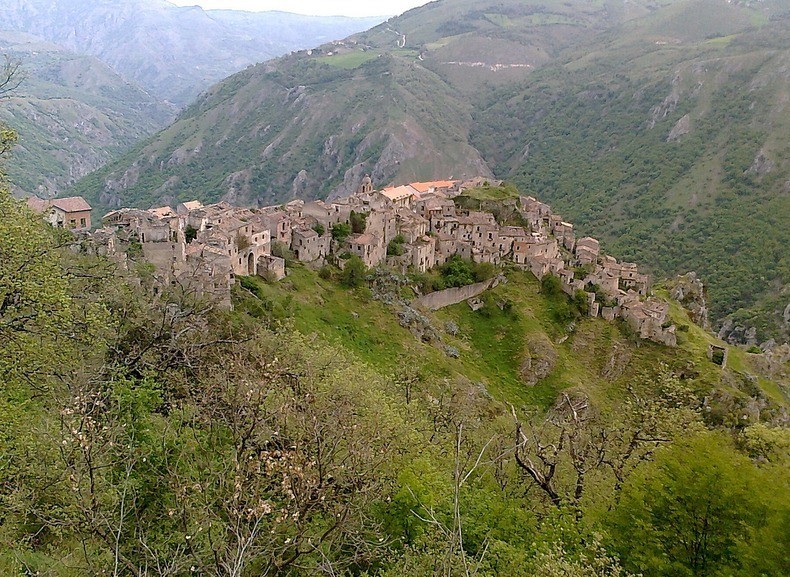 Romagnano al Monte, a small village in Salerno, was the recent addition to the Italian ghost town collection when it was destroyed by the Irpinia earthquake in 1980. Rather than rebuild, some of the village dwellers chose to relocate and moved a few kilometers away to a safer area. However, majority stayed behind. The town feels like a medieval ruin despite only being 30 years old and being besieged with the remains of electricity wires and modern conveniences. The village became a tourist attraction in the 2000s. 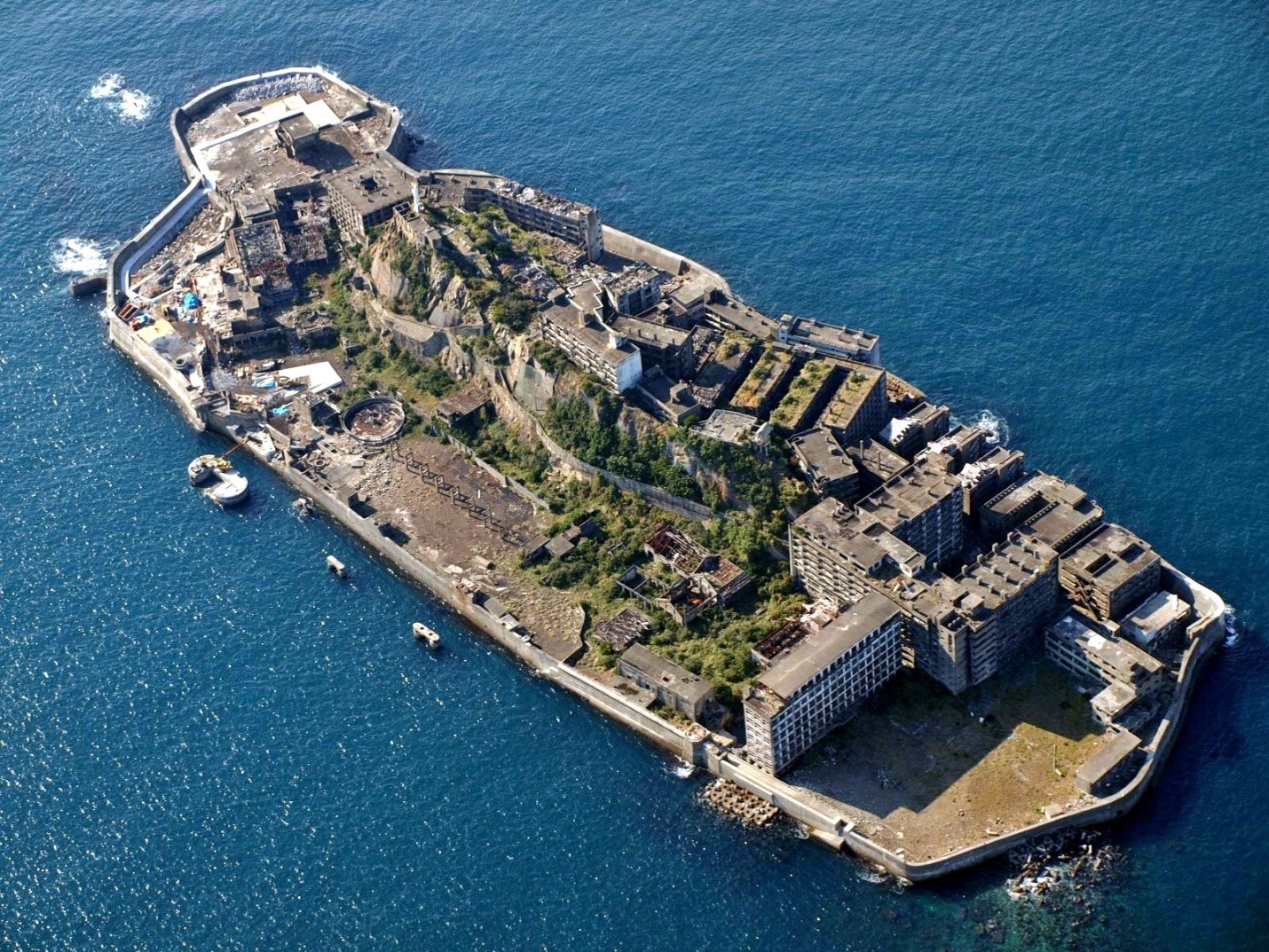 Hashima Island is one of Japan’s most famous places for urban explorers. It is popularly known as Gunkanjima (Battleship Island) due to its shape and high seawall formation. Occupied from 1887 to 1974 and besieged by rumors of forced labor, Mitsubishi bought the island in 1890 for its coal mining operation, which lasted well beyond two world wars. It went on to play a key role in the industrialization of Japan. The operation was closed down in 1974 as coal mining slowed down rapidly in the 1960s with the surge of popular petroleum. 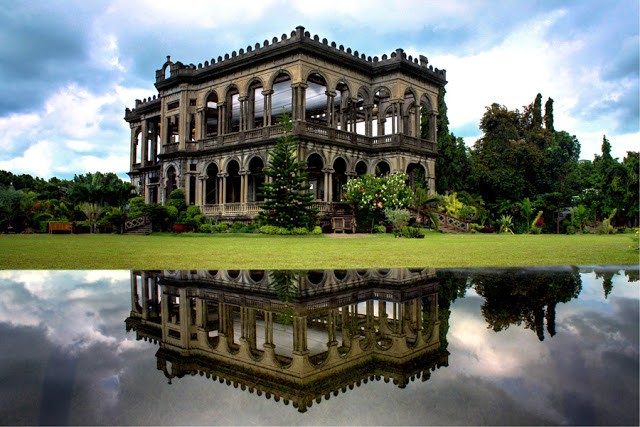 The abandoned mansion, known as “The Ruins” located in Talisay City in Negros Occidental, Philippines is the ancestral home of the sugar baron Don Mariano Ledesma Lacson. It was built in the 1900’s in memory of his wife, a Portuguese he met in Macao. The mansion was the largest structure in the area and was reduced to ruins after it was set on fire by the US forces during the World War II in a bid to avert the Japanese from using it as their headquarters. The beautiful mansion was preserved and was opened to the public in 2008 and is now one of the tourist attractions of the city. 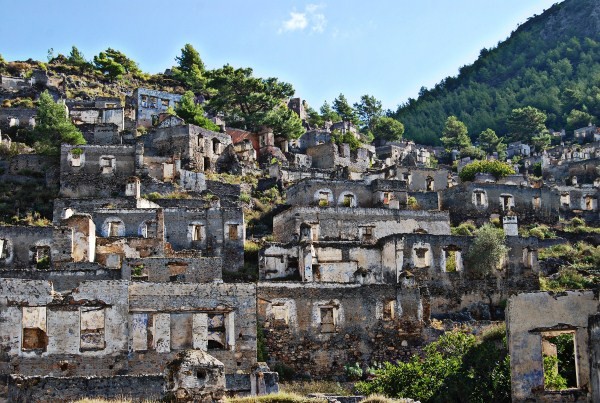 The ghost village of Kayakoy is just a short distance from the popular resorts of Fethiye and Olu Deniz. It had been abandoned, houses were breaking up, and streets were empty. These days, the village is one of the most visited attractions for the bustling surrounding resorts. A small number of locals sell souvenirs and food to passing tourists, and some houses that are a few blocks away from the bunch of abandoned properties are now occupied.

The tragic city of Beichuan became one of Asia’s modern day ghost towns when it was destroyed by the Sichuan earthquake in 2008. Nowadays, the town ruins are mostly preserved, and many of the buildings remains the same as they did only a few minutes after the earthquake struck. Support structures around the buildings made the ruins safe for visitors to witness the first-hand devastation brought upon to this great city. 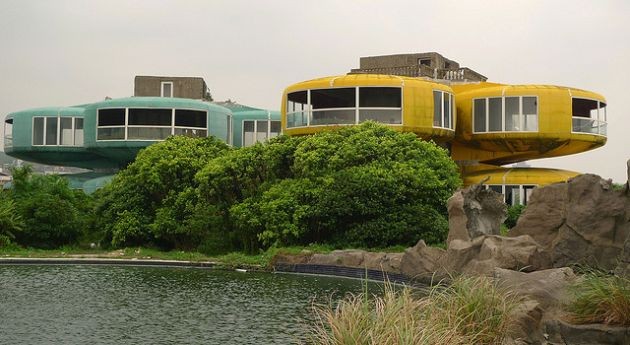 The unique structures of the colored pod homes, known as Sanzhi UFO Houses were built in New Taipei City, Taiwan in 1978. It was designed to be part of a holiday resort intended for US military officers serving in East Asia and the well-off Taiwanese. However, the project did not take off and was abandoned after two years amid stories of untoward incidents that cast a gloomy shadow to its development. Because of their futuristic and peculiar structure, they are often called as ‘ruins of the future.’  The abandoned buildings constituted one of the world’s strangest modern ghost towns before they were torn down in late 2008 and became an unusual tourist attraction. 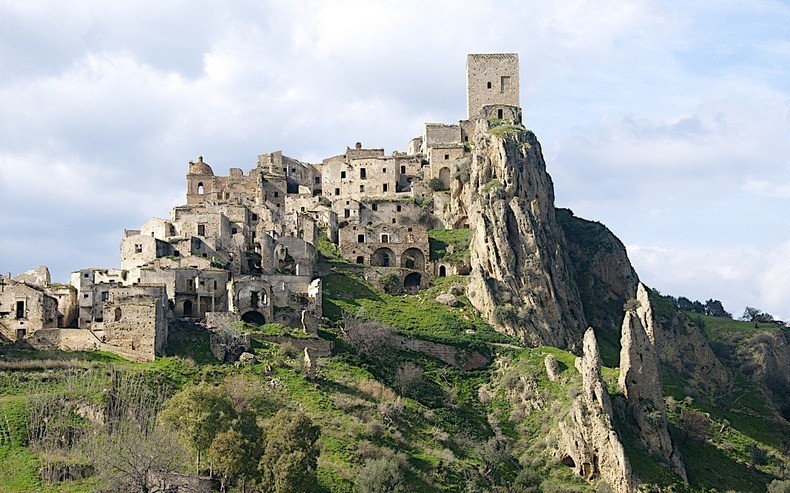 The old town of Craco was deserted due to natural disasters. Mass migration of the villagers is cause by several contributing factors like war, landslides and recurring earthquakes. Most dwellers moved down the road or to America between 1892 and 1922. The remaining inhabitants left Craco after the1963 landslide. The abandonment has made the town a tourist attraction and a popular filming location of  popular movies such as “The Passion of Christ”, “James Bond: The Quantum of Solace” and others. 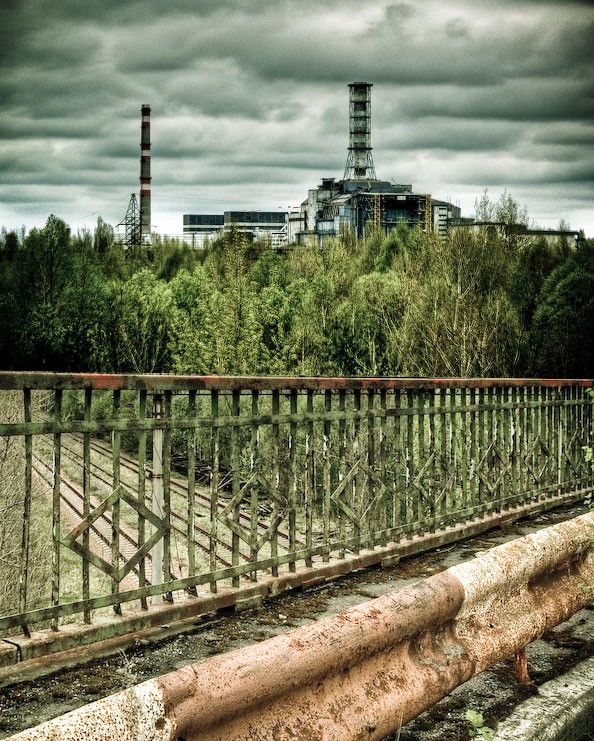 Pripyat is known for the Chernobyl disaster that happened at Chernobyl Nuclear Power Plant. The population of about 50,000 were evacuated on April 1986 to a new town-sputnik, Slavutich, that was built about 50 km from the nuclear power station. Pripyat was founded on February 1970 mainly for the construction and further exploitation of Chemobyl nuclear power plant which became the ninth nuclear power city in the Soviet Union. The city was abandoned after the disaster and is now known as the ghost city. Today, Pripyat attracts tourists and scientists from all parts of the world. 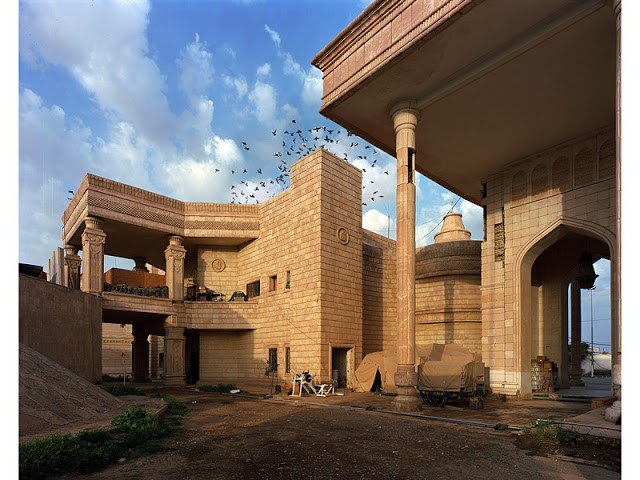 During the nearly 24-year stay in power of Saddam Hussein in Iraq, he has built dozens of palaces in every major city to show his authority and reflect his image as a powerful eccentric leader. These palaces housed not only the dictator and his family, but also his party officials, friends and mistresses. He had eight main palace compounds holding hundreds of luxury mansions, guest villas, and office complexes. After the Fall of Baghdad in 2003, some palaces were occupied by the American army, while others were heavily looted by Iraqi citizens. By now, all buildings have been handed over to the Iraqi government.

How do you find these ghost towns and deserted settlements?  A quick research of these places would keep you more interested to learn more about their history. It’s about time to explore places that are unique and interesting. Exploring new destinations would be fun and exciting!